Girraween National Park is an area of the Granite Belt in the Darling Downs region of Queensland, Australia reserved as a national park. Girraween is known for its spectacular flowers, dramatic landscapes and unique wildlife.  At the time of this visit (October 2020), this area had been in a prolonged drought, with the nearby town of Stanthorpe having completely run out of water for almost a year.  Sadly, this has continued into 2021.

Despite this, there were still many opportunities to enjoy the wildlife and scenery.  The terrain in Girraween in drastically different to the coastal region where I live, with its huge expanses of exposed granite, and weather-carved boulders.

The number of birds and mammals was fewer than expected, but this was likely due to the dry conditions, as they may have moved elsewhere in search of water.  Nevertheless, there were still many species to be seen.

The park’s reptiles of course, have less opportunity to move on in search of water, and mostly just have to make do as best they can in the dry conditions.  Bald Rock Creek, which runs through the park, is home to the Bald Rock Creek Turtle, also called the Short Necked Turtle.  This turtle is rare and its conservation status is Vulnerable.  It is found only in stretches of Bald Rock Creek. Very little is known about these turtles, some have had their back legs tagged as part of an ongoing research project.  I was lucky enough to photograph one sunning itself in a shallow part of the creek.

Girraween National Park is a strikingly beautiful place, and one I hope to visit again once the drought has ended.  I expect the wildlife will quickly return to its former abundance when the rains finally come.

Day five – 26 September, Tin Can Bay to Lake Cootharaba  (70km)
Having found Cooloola Way a bit too challenging, I was keen to take an alternative route back to Lake Cootharaba.  Some helpful locals suggested I take the (only) road out of TCB and then look for Counter Rd, a long straight dirt road running south which meets up with the Kin-Kin Pomona road.
From TCB to the Rainbow Beach turnoff, the road has a reasonably wide shoulder, making it safe enough to cycle on.  However, past that point there is no shoulder at all and the road is quite narrow.  Safe cycling on the road was out of the question, as the trucks take all the available room and don’t seem very patient with other road users.  Fortunately there is a forestry track running parallel with the road so I opted for that as a safer – but slower and bumpier – option.

After a few kms I turned off into the forestry, taking the Toolara-Como road hoping to find my way to Counter Rd.  I got a little lost, but realised I was heading in the right direction when I came to the crossing at Coondoo Creek.  This was a nice shady spot to take a break.

Soon after, I found Counter Rd and headed south.  There was still a long way to go, but I knew that navigation wouldn’t be a problem from here on.  Counter Rd is a long, long road with a few steep hills.  But nowhere near as tough as Cooloola Way.

Eventually I reached the bitumen at Kin-Kin Pomona road, then turned off towards Harry’s Hut Rd.  From here I could retrace my original route along the Boronia Trail, crossing Kin Kin Creek and through Elanda Point to Lake Cootharaba.

Riding back through the lush grassland near Elanda Point, I came across the now familiar sight of kangaroos grazing in the cool of the afternoon.

My host at Cootharaba lives alongside a large area of forest, and the wildlife often walks, flies, slithers or hops in to visit.  This morning a very large kangaroo bounded into the vegie garden to inspect what was on offer. 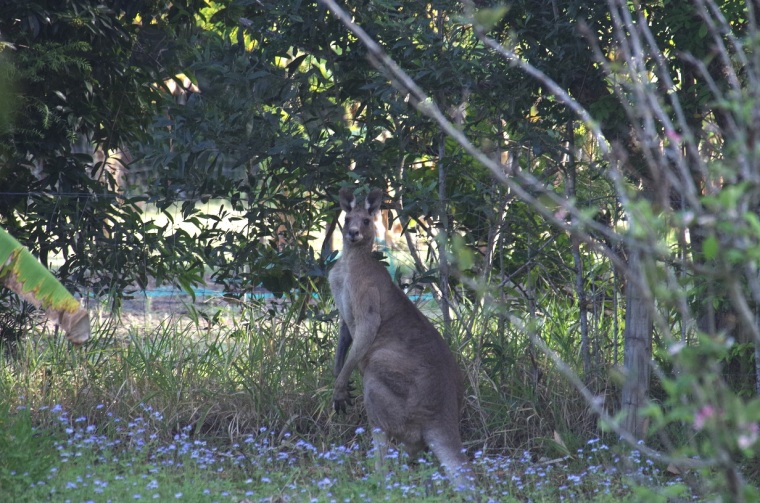 After breakfast I headed for Tewantin, and got the only puncture of the entire trip on a smooth stretch of bitumen.  All that distance on tough, stony dirt roads and rocky forestry tracks and my only flat tire was on a “proper” road!  No problem though – I was carrying spare tubes and was on my way again soon.

Another perfect Spring day, with lots of great ocean views along the cycleway.

Arriving at Coolum, I stopped for a break at one of my favourite ocean viewing spots.  Soon after, a Little Pied Cormorant flew into a tree beside me and proceeded to dry and preen its wings.  This is a different species to the Little Black Cormorants I saw at Tin Can Bay.

Day seven – 28 September, Coolum to home (69km)
The last day of my first bike tour and it was a glorious sunny morning in Coolum.  A quick dash to the seaside in case there were any whales to be seen (nope, still none) then onto Mudjimba for a big breakfast.

This final leg of the trip was roughly in two halves – bikeway from Coolum to south of Caloundra, then the forest road to Beerwah station.  The construction in the photo above is at Alexandra Headland, it’s the HMAS Brisbane Mast Memorial.  In 2005 the ex-HMAS Brisbane was scuttled off the coast here to create an artificial reef and is now a diving site.

Back in the Beerwah State Forest again, on the home stretch to Beerwah Station and then on the train to Brisbane.  The Glasshouse Mountains can be seen in the distance.

And after a grand total of 405km and a week on the bike, finally home again.  This had been a wonderful experience, with plenty of challenges as well as relaxation and tranquillity.  Travelling in this way gives you a great sense of freedom and independence.  And to have gone all that way without burning up fossil fuel in a car is doubly rewarding.  I hope this will be just the first of many bike tours in the days ahead.  Thanks for reading my blog everyone!

Last Sunday I cycled from home to the nearby Tinchi Tamba wetlands reserve, which is on the north eastern edge of the Brisbane area.  I had read that there were kangaroos here, and thought my best chance of seeing them would be early in the morning.  I reached the reserve at about 7.30 am, and saw dozens of them grazing contentedly.

While they kept their distance, they didn’t seem too disturbed by my presence.  They probably see bushwalkers here all the time and must be accustomed to people nearby.

I’m glad I went as early as I did, because by about 9am they had all managed to conceal themselves completely.  It’s quite amazing how so many large animals can make themselves virtually invisible when they want to.

It’s an absolute delight to have such beautiful wildlife living nearby to a major urban area.